If you want to build lean muscle, one of the first and most important concepts you should grasp in the gym is – it’s not how much weight you move from A to B, but more how much tension you can create in the muscle from A to B. There’s actually three major pathways that induce hypertrophy. According to Brad Schoenfeld in “The Journal of Strength and Conditioning Research” mechanical tension, muscle damage and metabolic stress are the factors that will induce the results you desire. By utilising various tempos and using them as a way to vary our workouts is a great way to tick all the boxes of these three pathways for hypertrophy and progress forwards. A quick lesson in tempo – tempo can be defined as the speed at which we perform an exercise. It’s displayed as four digits.

For example a 2010 tempo on a bench press would mean: two seconds lowering the bar to the chest, no pause at the bottom, one second pressing it up and no pause at the top position. The tempos below are just a selection of some of my favourite for increasing lean mass. I’d certainly recommend you give them all a go to see which ones work best for you. Don’t play all your cards at once though, so try one for a few weeks before cycling it in for something else and don’t use one religiously, variety is the key to success in this game. Don’t be disheartened if some of the tempos force you to use a lighter load. Remember it’s all about maximising that tension created in the muscle, not the number on the dumbbell. 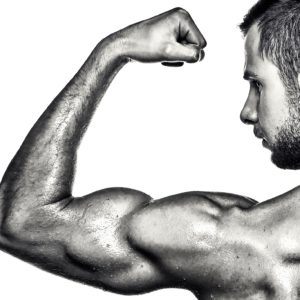 40X0
This is probably my all time favourite tempo for lean muscle mass gains. The most muscle damage is done during the eccentric portion of a movement, so by emphasising it through a specific tempo we can do more damage. More damage means more repair and faster results. For this tempo you’ll be using a strict four seconds on the eccentric followed by an X on the concentric. An X means to explode and move the weight as fast as possible. This stimulates the fast-twitch muscle fibres, which are the ones with the most potential to grow. Use a relatively heavy load for this tempo with 6-10 reps.

2020
Something tells me you’ll feel the burn with this one! A controlled eccentric followed by a controlled concentric can create some extreme tension in the muscles as well as increase the blood lactate level. High levels of blood lactate have been shown to stimulate more Growth Hormone (GH) release. GH is important for all sorts of things, but of most concern to us is fat loss and muscle gain. The 2020 tempo works best with isolation exercises (preacher curl, db flies, leg extension etc.) and a higher rep range (12-15).

3010
This is what I’d call the bread and butter of tempos for building lean mass. It should be your go-to tempo for most exercises. It emphasis the eccentric for more damage and uses a relatively simple and safe one second concentric. The majority of trainees (especially beginners) unconsciously use a 2010 tempo or even a 1010 tempo, when in actual fact it would be more beneficial to use this 3010 tempo. This is more of a universal tempo that can be used for any rep range and load.

8010
This one’s not for the faint of heart. I’d only recommend using it on the last set of an exercise for no more than three workouts in a row. It’s essentially a negative. An eight second long negative to be precise! That’s really going to do some damage to your fibres. We’re stronger on the eccentric portion of a rep, so to take advantage of this use a heavier load and go for 3-5 reps per set.