Take a look at the ABC fit results page, and you can see numerous individuals that have all seen success. 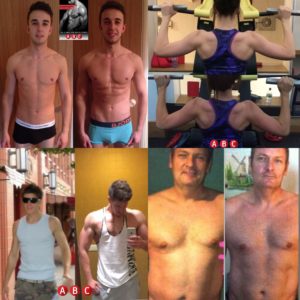 They fell in love with the benefits of their goals
Why are you doing what you’re doing? Yes, you might want to burn fat or build muscle, but ultimately there is always a deeper meaning behind it. Is it to look more attractive to the opposite sex? To improve self confidence? To fit into older clothes again? Look great for your wedding? Or just to improve overall health and well-being? If the benefits of achieving your goals mean that much to you, nothing will get in your way.

They all used some form of resistance training
Regardless of the goal in mind, wether it’s to build muscle, burn fat or improve health. Resistance training would of made an appearance somewhere during the week (if not all of it). Commonly and mistakingly associated with building muscle, did you know resistance based exercise can also burn fat, improve strength, maintain flexibility, increase bone density and protect your joints from injury? Best forms of resistance training include free weights (dumbbells/barbells etc.) body weight training and resistance machines.

They all committed to exercising at least three times per week
The frequency of times you exercise per week is dependant on many factors including training goals, recovery rate, exercise choices, nutritional intake and endocrine situation. Aiming for an absolute minimum of three sessions per week for the average person is a wise choice. Four to five would be even better if time allows. I’ve seen people progress on one or two sessions per week, however these individuals are often very de-conditioned and new to exercise.

They ate anything they wanted
Yes, you read that correct! Wether under my guidance as a 1-1 client, or just by following the ABC fit workout manuals they didn’t restrict/ban any foods. They simply focused on what they should be eating for a leaner, healthier and fitter body (see following habit). Whilst placing a ban on certain foods may seem like a good idea in the short term, long term it’s a road to disaster. Tell anyone they’re not allowed to eat something, and sooner or later the urge to consume it blows up. This is often followed by an all out binge of that certain food. It’s psychology, we all crave what we can’t have!

They made protein and greens the focus of their nutrition
By making lean proteins such as chicken, fish and eggs and greens like spinach and broccoli the focus of their nutritional intake the successful client is able to keep blood sugar levels under control and rapidly transform their body composition. The amino acids from protein are vital for the recovery and repair of lean tissue after exercise, and being quite hard for the body to breakdown it’ll cost more calories to digest – this increases the metabolic rate. Greens are packed with fibre and nutrients. They’re also very energy sparse, meaning you can afford to fill up on them all day without making too much of a dent in your overall energy intake. Perfect for fat loss!

They took sleep seriously
A good nights sleep is paramount for optimal recovery, not only from exercise, but from everyday life as well. Accumulating evidence from epidemiological studies and well-controlled lab studies indicate lack of sleep may increase weight gain and the risk of obesity. Lack of sleep also results in metabolic and endocrine alterations, such as:

Regardless of your goals, take sleep seriously and aim for 8-9 hours of sleep per night. Aim to be in bed by 10.30pm at least five nights out of week.

They were all consistent in their approach
Family, work commitments and social appointments can all sometimes get in the way. That’s life! However, whatever issues may arise it’s important to get straight back on the exercise, nutrition and recovery regime as soon as possible. Success, regardless of how fast or slow, is simply a matter of consistent progression forward.