5? 8? 20? If you’ve ever wondered many reps you should do for your goals, wonder no more! In today’s post we’re going to explore and explain common rep ranges. I’ve kept things simple, but also delved into some of the science behind why they’re effective.

For those that don’t know a repetition or rep is a single movement or cycle through a given exercise. It consists of two phases – an eccentric (lowering) and concentric (lifting). Typically we can split common rep ranges up into four blocks. That is 1-5, 6-8, 8-12 and 12-20+. Each range is more suited to a particular goal, which we’ll explore in more detail next. Keep in mind all rep ranges listed below would be performed with a load suitable to reach the given amount of reps, but no more. 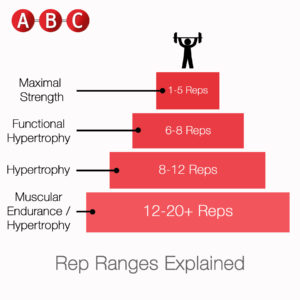 Maximal Strength (1-5 reps) – This is where maximal strength is improved. Most adaptations here will be neurological. Those looking to improve strength and power should work here.

Hypertrophy (8-12 reps) – Also sometimes referred to as Total Hypertrophy. This strikes a nice balance between functional hypertrophy and sarcoplasmic hypertrophy (which you’ll learn more on in the next rep range). Individuals looking to solely add lean muscle should spend the majority of their training sessions in this range. However they should occasionally work down in the functional hypertrophy zone and up in the muscular endurance zone.

Muscular Endurance/Hypertrophy (12-20+ reps) – Two main purposes can be obtained from this rep range. First of all and once again hypertrophy. More specifically sarcoplasmic hypertrophy. This is an increase in volume of fluid in a muscle due to the stretch and swell placed on them during training. This type of hypertrophy carries no functional benefit, it just looks good. Secondly, it can help to improve endurance. That is the ability to perform a movement over and over without fatigue. This range is also useful for vascularisation and active recovery from more intense sessions when light loads are used.

With these rep ranges in mind it’s also important to bare in mind there is always going to be a certain degree of crossover. I’d even encourage it for consistent progress and plateau prevention. For example, a hypertrophy oriented client could train in the maximal strength bracket for a given block of training and vice versa. It’s good to mix things up once in a while right?