Game Changers: Fuelled by the truth? Or fuelling you with BS?

Now straight off the bat and for the record I want to say this – I am 100% not against plant based diets. If you follow my Instagram you’ll see I even occasionally eat plant based meals. I am however 100% against people making false claims against animal products and the having the notion that one size fits all with the diet.

So before you start streaming and fall for the latest Netflix nutrition propaganda, I want you to read this post. It’ll prevent you from becoming brainwashed by misleading facts, false claims and biased beliefs. 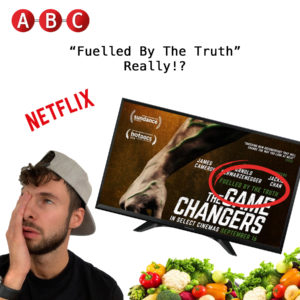 We’ve seen it before with “What the Health” and now Game Changers. Whilst the premise of these shows sets a solid foundation for global issues and epidemics around health and wellbeing, they’re often laden with misleading information in order to try and frighten us, as the audience, into a particular way of eating. I’ll be honest with you, these Netflix documentaries serve much better as background noise for those saucy “Netflix and chill” encounters, as opposed to a solid scientific look at the topic in question. Remember these points:

1: Shows are often funded by a company or individual/s with time/money invested into said topic. Sometimes you have to dig deep to find out, but there’s clues all over the place! Among the executive producers list of Game Changers is James Cameron and Pamela Anderson. What’s a multi-billion pound Hollywood film producer and ex-playboy model doing producing a documentary about the benefits of swapping animal based protein to plant based protein I hear you ask? Well funnily enough James Cameron owns Verdient foods – an organic pea protein brand. There’s over $140 million invested into this venture, so it’s not pocket change! Pamela on the other hand is now an animal rights activist.

2: Studies contained within shows are often biased. Ofcourse they want to sell you whatever they’re trying to sell you. Whether it’s a product off the back of it or a lifestyle. Here’s how the flow of this journey would most likely work:

I know, it’s not always about making more cash. But no one wants a business to fail right? Go in with an open mind, but don’t believe everything you see, read or hear.

3: Remember there’s no right or wrong way to achieve a particular goal. Sorry vegans, but there’s more than one way to cook a theoretical egg. For example for fat loss we need a kcal deficit. How you create this is up to you (it could be through cutting meat out of your diet or it could be Keto etc) The determining factor behind this is the belief systems you have around a particular diet or way of eating.

Let’s look at just some of the claims made by the Game Changers documentary and if they actually hold up:

Claim #1 – Gladiators were vegan.
Saying gladiators were vegans is putting it mildly based on the results of this study. Remember gladiators were slaves and therefore fed like them. A plant based diet between 27BC and 476AD was most likely plentiful and cheap. Feeding large amounts of meat would have been much more expensive. Based on the amount of nitrogen found in the bone samples it was likely they did in fact occasionally eat animal products. It’s also been noted that gladiators diets often varied depending on where they were located and what was available. Bone samples from Thebes showed higher sulphur concentrations indicating a diet rich in seafood.

Claim #3 – A strong man gained 25kg when he switched to a vegan diet.
Maybe he did! But he probably ate more calories. Probably also took performance enhancing drugs (FYI the strongman organisation this guy competes in isn’t drug tested). They also forgot to mention he necks back 4 protein shakes per day to up his protein intake to around 400g.

Claim #4 – Beetroot juice can improve your bench press by 19%.
This one had me creasing. In an all out effort to demonstrate the performance enhancing abilities of plant based foods, filmmakers threw out this claim. Now 19% on the average bench press is a fair amount of extra kilograms. And there is an actual study that demonstrated this. However, the study didn’t refer to 19% more weight. It actually referred to 19% more repetitions. Ahhhh! I guess the filmmakers forgot to disclose this. At the least this simply proved beetroot juice may have an anti fatigue effect during training, but I’m sorry it won’t add an extra 19% of load onto your lifts.

Claim #5 – Plant based species in the animal kingdom are jacked!
Game Changers states how you can become “as strong as ox” by eating no meat and just focusing on plants just like an ox. Let’s not forget an ox is a completely different genetic being to us humans. It also looked at gorillas who are indeed jacked! However they can eat up to 18kg of plants per day for an adult male. That’s a lot of food! They also have specialised digestive tracts and bacteria in the gut that means they are able to extract amino acids out of plants that just wouldn’t be bioavailable to us as humans.

Claim #6 – Eradicating meat from all humans diet will save the planet.
Ok so this claim may have some sort of compelling argument towards limiting meat consumption. After all raising meat takes up land, water and energy etc. However the filmmakers misrepresent the actual truth about meat production on the environment. They claim it accounts for more than the total amount of emissions of all forms of transportation worldwide. This isn’t quite true. Agriculture equates to around the same amount of green house gas emissions worldwide for sure, but remember agriculture isn’t just meat production. It includes all types of farming from grains to crops to fruits.

A Closing Word – As a coach, I pride myself on being as unbiased as possible. I look at everything with an open mind and educate myself around different views and ways eating. As already stated I am not against plant based diets. And I’ve worked with a handful of clients that are vegan and have seen great results. You need to take all the information presented (in the documentary and in this post) and make up you’re own mind. Opting to eat less animal based proteins may be a good thing, if anything for your own conscience of ending another living beings life, but probably not for improved performance, strength or muscle gain.

Game Changers simply proves one thing – yes, you can be an elite athlete on a plant based diet. What it fails to acknowledge is that you can also be an elite athlete by eating animal based foods too. Let’s not forget the fastest man on earth filled up on chicken McNuggets before running 100m in 9.58 seconds!