Back in the 1960’s everyone wore a flat shoe to run and gym in – converse, keds, vans and onitsuka’s to name a few. Then during the late 1970’s the transition occurred. Shoes began to appear with extra thick rubber and air cushions stuffed under the heel.

Fast forward 40 years and as running gained popularity, heel-striking become a common occurrence in novice runners, so more and more running shoes hit the shops with a raised/cushioned heel. You might think a 0.5 inch raised heel isn’t going to effect you much, but it knocks optimal joint mechanics out of line up the whole chain. This can become an issue when running, walking or standing for long periods.

Let’s start from the bottom and take a look at what can happen to the arch of the foot with a raised heel shoe. 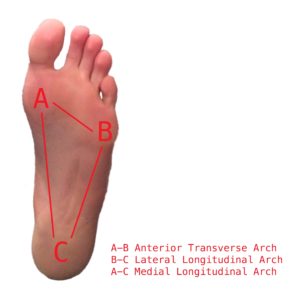 Contrary to common beliefs, the arch of the foot is actually a non-weight bearing surface and it’s more than just ligaments connecting bones. It’s really a combination of arches: the anterior transverse arch, lateral longitudinal arch and the medial longitudinal arch – comparable to a suspension bridge. Many people invest in the typical raised-heel running shoe with the believe that it will help support the arch. In actual fact it’s altering the way weight is distributed on the foot, weakening the arch. Moving up the chain, there’s more bad news. Here’s what else is going on:

– The cushioned heel encourages a heel strike during running

– Changes in the alignment of the hips and spine

The best option is to recondition and embrace the natural technologies you are gifted with. For running or training, look for shoes that provide a barefoot like feel. I’d always recommend a “zero drop” heel, or as close as you can get.

For gym work – squats, deadlifts and lunges etc. you’ll notice you feel more planted into the ground. If you’re currently wearing running shoes with a raised heel, and wish to make the transition to a flat shoe, take your time. Plan on a six week transition. Each week, increase the amount of time you spend in your new minimalist shoes to allow the muscles of the foot to build strength. You could also use this simple exercise to help reawaken your arches. 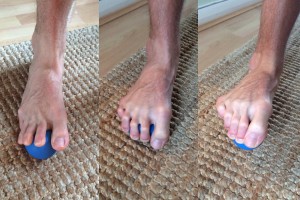 Using a soft ball, spread the toes wide and try to pick the ball up with your feet. Imagine trying to pick a basketball up with your hand. Lift the ball an inch off the ground and place it back down. That’s one rep. Go for 3 x 10 reps. You should perform this exercise multiple times a week during your six week transition period.