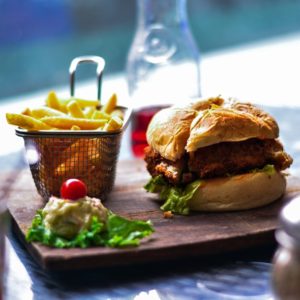 With that said, a cheat meal, or re-feed as its sometimes known, can actually benefit your results if used correctly. It does this through a few key pathways. I’m generalising here, but if you’re looking to lose body fat we can assume you’re in a slight calorie deficit. Being in a deficit for a long period of time will ultimately mean two things; Your thyroid will down-regulate which means a slower metabolism and your progress will halt. By having a re-feed you will tip yourself back out of a calorie deficit which will temporarily up-regulate the thyroid. You would then put yourself back in a deficit for X amount of days that follow and with your freshly reved-up metabolism your progress will move forward once again.

A cheat meal is slightly different from your typical healthy meal of lean proteins, greens, smart fats and low GI carbs. They often deliver a higher carb hit and have a higher calorie content. With a fat loss plan most people assume they’re there simply as a reward. “You’ve worked hard this week, have a night off!” Yes this is true and it can be a great motivator, but they can actually serve more of a purpose for maximising your results if we strategically place them within your nutritional plan, which we will get onto soon. When selecting your cheat meal, ensure it has a protein source and it is only one meal, not a full-on weekend binge! Don’t drink your calories either, so stay away from fizzy drinks and alcohol. Nor does it have to be fast food or restaurant bought meals. If you can make your own using fresh ingredients, even better. So you can get an idea, below are some good cheat meal options:

So now we get on to the all important question – how often can you cheat? I’ve had great success in the past by using this formula below. I’ve broken it down into stages, so have a quick look and work out where you are with your fat loss journey and we will then establish the why.

Once again I’m generalising here, but let’s look at what is typically going on nutritionally and hormonally with each stage. We’ll focus on a few key hormones – insulin and leptin as well the thyroid function. Insulins job is to transport glycogen from the carbohydrates we eat into cells. Leptin is a satiety hormone created by fat cells that helps to regulate energy balance by preventing hunger. The thyroid is a small gland in the neck which acts like a control centre for the rate of metabolism.

Stage 1
You could start your journey at any stage, but assuming an individual is sedentary, hasn’t exercised for years and has a poor diet, this is where they usually begin. They consume lots of processed foods and the macronutrient balance is very carb-centric. As a result they become very insensitive to insulin, meaning you can’t get glycogen into cells and the body has to produce more and more for it to have a efficient effect. The thyroid has probably been down-regulated, so the metabolic rate will be running very slow. Again generalising, but we can also assume they’re overeating for their current basal metabolic rate, even if it seems like they’re not eating much at all. Each time this happens leptin is produced over and over until it’s signal becomes muted and doesn’t quite work like it should. As a result your brain can’t quite work out when you’re full, meaning further overeating becomes all too easy. Having a cheat meal during this stage will only undo any progress because your body simply can’t deal with it. Hormonally things are a mess, but it’s nothing that can’t be fixed over time.

Stage 2-3
Somewhere in the middle. Once the diet has been cleaned up with quality, clean foods and an effective exercise routine has been put in place, results will start to happen. Hormones will begin to work how they are intended. The strategic cheat meal or re-feed during this stage is important not only for continued motivation, but also for continued progress to move down the stages. Each time you consume your cheat meal, you’ll tip yourself back out of a calorie deficit which means the thyroid will speed up the metabolism once again.

Stage 4
The individual is now eating clean foods at every meal, but allowing one cheat meal or re-feed per week. At this stage the body can deal with it more efficiently. The thyroid is keeping the metabolic rate ticking over at a decent rate and insulin sensitivity has been reset, so your body will only need to produce a small amount for it to effectively shuttle glycogen into cells. Due to body fat levels being in a low, but healthy range, leptin will be produced when needed, but not to an extent that the signal becomes muted like before. As a result of this the individual will be more in tune with their hunger and satiety levels. We all know that one person that can eat whatever they like and won’t even gain a pound right? Chances are they’re in stage four. Disclaimer: I’m not saying you can get to stage four and eat whatever you like! Do that and you’ll soon end up back at stage 1.

So just to wrap this up, we can conclude that the leaner you are, the more frequently you can have a cheat meal. Not because you’ve worked your butt off and deserve it (well partly), but more so because you’ll have optimal hormone levels and a metabolic rate to be able to deal with the cheat meal efficiently and maybe even actually benefit from it.