Burn more calories than you consume, put yourself in a deficit, and boom you’ll burn fat! Ofcourse there’s loads more factors that need to be considered, including endocrine function, metabolic flexibility and nutritional status history, but stripping it down to its bare bones this is how fat loss works. As running grows it’s popularity, it’s easy to see why. It requires little skill to do it, it’s cheap, can be performed anywhere, and for a 75kg male at a speed of 6mph it burns an average of 600 kcal per hour. Which isn’t bad at all. Don’t get me wrong, I’m not anti-running, but as part of my job I’m here to show you more effective ways to allow you to get to your goals quicker. So if you want a bigger bang for your buck in the form of a higher calorie burn and faster fat loss, give these alternative cardio exercises a shot.

Rowing – Average of 600+ kcal per hour
With little skill needed, an equal or if not higher hourly calorie burn and with less impact on the joints than running, you could argue it’s more suitable for all populations. The biggest myth about rowing is that it only works upper body muscles. It actually works a range of upper and lower body major muscle groups including quads, hamstrings, glutes, core, lats and biceps.

Battle Ropes – Average of 650+ kcal per hour
This upper body cardio workout is great for the core, arms, shoulders and upper back. It’s also pretty hellish on the heart and lungs too. More and more gyms are beginning to include them in their set-up, so if you have a set available I would definitely make use of them. 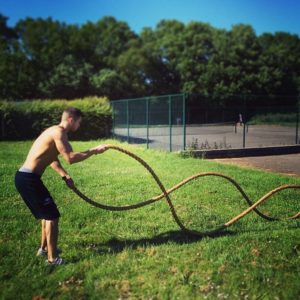 Boxing – Average of 700+ kcal per hour
Nothing beats stress and burns calories like an intense punch bag or pad work session. It’s also one of the less tedious forms of cardio, in the respect that it’s very easy to get stuck into the workout, forgetting your woes and worries whilst taking it all out on a bag or willing partner.

Jump Rope – Average of 780+ kcal per hour
I’m not talking about the leisurely skipping you used to do on the playground in primary school here. We want intense speed rope work! It takes a while to master, but once you’ve nailed it, you’ll never look back. It can also help develop coordination, making it a great fat burning and performance enhancing activity.

Strongman Activities – Average of 800+ kcal per hour
Tyre flips, prowler sled sprints, farmers walks and pushing cars to name a few are killer fat burning exercises. Ok I’ll be honest, I couldn’t find any accurate info on how many calories strongman activities burn, but I know from personal experience it’s over 800! Despite getting more into resistance training territory, strongman activities still work the heart and lungs just like any other traditional cardio based work, especially when performed at pace with shorter rest periods. Combining resistance and cardio into one like this will also rev-up the afterburn or Excess Post-exercise Oxygen Consumption (EPOC) effect for up to 36 hours after the session.