The elbow extensor (tricep) makes up 60% of the upper arm, so if you want bigger and stronger arms, tricep training is extremely important. Stronger triceps will also mean healthier elbow joints and heavier weights lifted on big pressing exercises, such as the bench press. The tricep is made up of 3 heads – the long head, medial head and lateral head. Even though it’s impossible to isolate each head of the triceps, by changing your body position during a typical tricep extension movement you can influence which area you’re working. 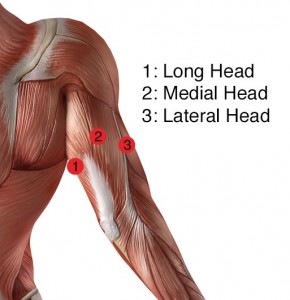 Incline to perpendicular
The further away the elbows are from the belly button, the greater the recruitment of the long head of the triceps.

Flat
In a flat position the elbows will be at the mid-point between being inline with the belly button and extended above the head. The lateral and long head are greatly influenced from this position.

Decline
The closer the elbows are to the belly button, the greater the recruitment of the medial and lateral head of the triceps.

It’s also worth mentioning hand position can influence different areas of the elbow extensor. As a general rule, pronation (hands down) increases recruitment of the lateral head. Supination (hands up) increases recruitment of the medial head. Ensure you regularly use extension variations from each of the three categories above to give a thorough training stimulus to each head. Try this tricep hypertrophy workout for maximally developed horse shoes…